Born in St Boniface in 1837 of French and Indian parentage, Gabriel Dumont's childhood was spent in the Saskatchewan country, where he grew accustomed to the semi-nomadic existence of the Metis. These were the proud days of the Metis nation, when its people roamed freely throughout the Prairies. The most stable social institution was the annual buffalo hunt with its rules. When Gabriel Dumont became head of the Great Saskatchewan Hunt in 1862 the end of the nomadic lifestyle was already in sight.

As the buffalo herds dwindled, the Metis began to form more permanent settlements, but were alarmed when their pleas for recognition of their land rights were ignored by Sir John A Macdonald's government. Dumont appealed to Louis Riel, leader of the Red River Rebellion.

Riel spoke up for the Saskatchewan Metis, but their petitions were ignored. In 1885, the Metis took up arms against the government forces. Dumont spurred the outnumbered rebels to several victories. After the Metis defeat, Dumont fled to the United States where he spent time with Buffalo Bill's Wild West Show until an amnesty was declared and he was able to return to his home. 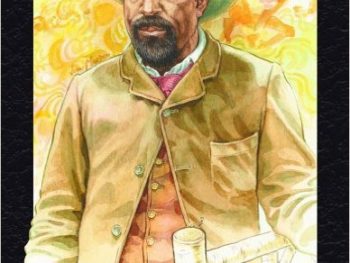